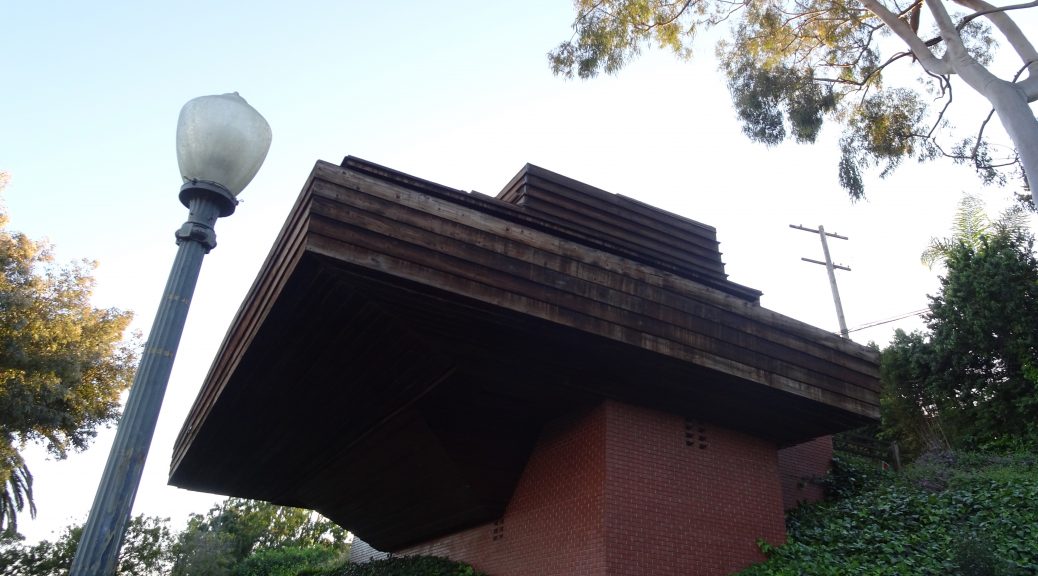 We visited the George Sturges House, designed by Frank Lloyd Wright in 1939 rather spontaneously in the evening short before sunset. As we arrived we were not even sure if the house was inhabited or not.

From the internet, we had learned that it has been a difficult case to sell the house in the past. After the deaths of its last owners Jack Larson and James Bridges the house descended into their foundation. In 2016, the Los Angeles Modern Auction announced to put the house up for auction. More than 100 potential buyers viewed the property but in the end no qualified bidder was found.

Our little gathering in front of the house must have drawn the attention of one of the neighbours. First, we were not sure if he was pleased to see us standing and parking in the street, but luckily, he was very interested to find out why we visited this landmark. He told us about the immense problem of selling the house, so the story we have read on the internet became more vivid. He updated us with the news that some weeks ago the house had finally been sold. He believed that the reason why it took so long to find a new buyer was the humidity the house suffers from, especially in the lower level where the chimney is grounded.  In addition to the bad condition the expected price was set too high which might have been a crucial factor, too. The fact that the house was finally sold made him very happy since he really appreciated living next to a Frank Lloyd Wright house; ideally next to one that is well taken care of.

After the little chat we had a closer look at the house itself. It was pretty much equivalent to the pictures we had in mind. The nautical connotation became visible immediately, since the cantilevered balcony faced the street. While standing beneath the balcony the altitudes proportions of the dwelling were easier to understand – it was very impressive and I felt very small in contrast to the big balcony dominating the lot. Nonetheless it was difficult to conceive the whole setup, since the house respectively the site seemed somehow enclosed, even though there was no fence or wall. Instead the plants next to the street, but also the heightened building itself in connection to the sloping road and even the long driveway up to the house amplified the feeling of inaccessibility.

Regarding the fact that with only about 110m2 the living space is rather small the whole property and the house itself seemed a lot bigger than that. I could imagine that this results from the lot being situated at the corner of the street. In contrast to the neighbouring houses I had the feeling that it could unfold. Somehow it seemed to be more open to the public than the surrounding houses.  It was not confined by a real enclosure, but was still not accessible due to its construction resembling a nautical fortress.