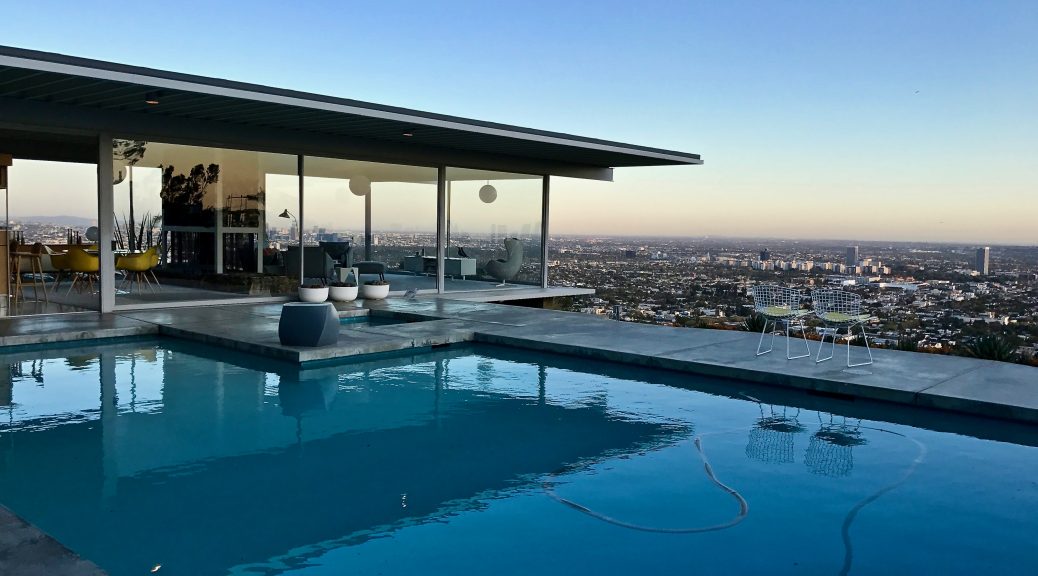 Pierre Koenig built the Stahl House, situated in Hollywood Hills, in 1958 for C.H. „Buck“ Stahl, an ex-football player, before proposing the project to the Arts & Architecture Magazine’s Case Study House Program. When it was accepted a year later, the Case Study House No. 22 (as it was called now) was ready to be moved into. Koenig’s vision to use industrial materials such as glass and steel in order to evoke an aeronautic-like construct was a huge avant-gardist step in the architecture of the 50’s, although not completely original. To the contrary, it could be considered to be in line with the glass pavilion cult which had been practised during the pre-war modernity era. The siting of the house on a sloping site enabled a unique panorama lookout over the periphery of the city. It hovers above LA whilst providing a scenic view in three directions.

Later in 1999, the International Styled building was declared a Historic-Cultural Monument by the Cultural Heritage Commission of the City of Los Angeles. Well-deservedly declared as such, considering that the architecture manages to combine the industrial-style, slope-resembling structure with classical features.

It didn’t take long  for CSH #22 to arouse Julius Shulman’s attention. The world-famous architectural photographer then found a new playground to snap. He knew exactly how to stage LA from this site and as a result, he raised a new awareness about the higher middle-classes’ prosperity. Of course, I was very curious what this place looks like in real life. The aesthetic effects are massive, but such a photogenic place might prove disappointing once actually being there.

Another point is that the Stahls as an originally working-class family constituted a rare exception with regard to the ownership. It seems surprising that the scope of the CSH included materially less fortunate owners, thus allocating considerably unconventional inhabitants to an iconic Californian villa. In most of the other luxury private homes we visited, more or less upper-class societies had resided. Hence, in greater detail, we were about to visit a private family place where three small children were raised in. I was rather sceptical whether the environment would be child-friendly after all.