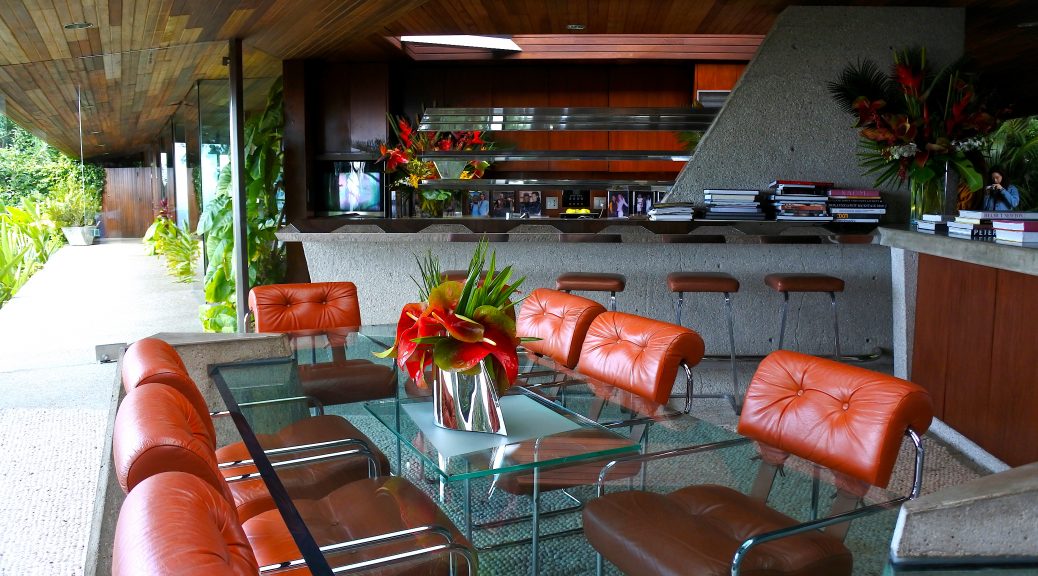 Actually, being at the site didn’t disappoint any of my expectations. Everything is readily identifiable of still having Lautner’s handwriting. The objects in the house — be it the entrance gate, the dining table or the ashtray — are all cornered and furnished with sharp endings. They appear to be constructivistically styled — like precisely designed splinters. The ceiling is the only part of the architecture in which not a lot of wooden materials are integrated. Nonetheless, everything just fits, the natural and technoid are perfectly synchronised. The most commonly used materials are concrete and high-grade steel. Cushions are bright-brown coloured, dividers between the inside and the outside are made of glass and also the ground is made of bright stone. This causes a clean and straight modernist appeal. Lautner succeeds in realizing the ideal of structural purity. Moreover, one could argue that the house clearly exposes baroque opulence due to its rich reference to expressive metaphors, as in the eye, or the connotation of the sky, or the cave.

It is my intention to make clear how traditional ideas of buildups and aligning the house’s sides was completely diced. The simplest question concerning a private home cannot be answered easily: Where is the front? Where is the rear? I simply underestimated Lautner’s accomplishment to hide the house’s privacy completely in midst the botanical thicket. I looked for any perspective from which the house’s external shapes themselves are visible, in vain. Such a complex structure can merely be compared to the constructions of ancient Roman imperial villas.

To access the entrance of the house you have to follow a densely forested narrow driveway. At this point the feeling arises that you’ve reached the house’s back. But at the same time, it presents itself as the entrance with that distinctive American parking area to be found in front of every home. Moreover, there is no front. There is no noticeable front gate, only low and narrow walls outside which lead you into the building, creating a maze-like effect. After crossing a little fishpond there is a glass slide door, after having gone through which you’re inside. But there is no sentiment whatsoever that you’d associate with being inside a house. The huge glass walls permanently cause you to look outside. A multitude of ivy creeps along the sloping wall which is partly outside, partly inside, is placed on the top. At second sight, you realise the ivy merely crosses the glass divider unimpeded, ensuring a strikingly natural touch.

The Sheats-Goldstein Residence is an absolutely shy masterpiece, due to its struggle against denuding. Simultaneously, due to the owner’s known obsessions and strategies, the house is surrounded by an exhibitionistic aura. Even standing on its own tennis court, which is located on a slightly elevated level, one cannot catch a glimpse of any front. It’s a real cave, a social exile. It’s a safe haven for L.A.’s celebs who are drowning in attention during the day and thus escape into their private hideaway during the night. Sheats-Goldstein only allows us to have a proximal look at the iconic steep slope — the property’s décolleté — from the pool’s side, which we know thanks to the photos is the forefront — the media forefront, to be exact. The user forefront — where the entrance to the house is — is vis-à-vis with the latter. And as one can see, Lautner solved both issues, being the retention of the resident’s privacy on the one hand as well as the suspense between in- and outside on the other hand with a single solution: both aspects could be considered as crucial for modern outdoor living.