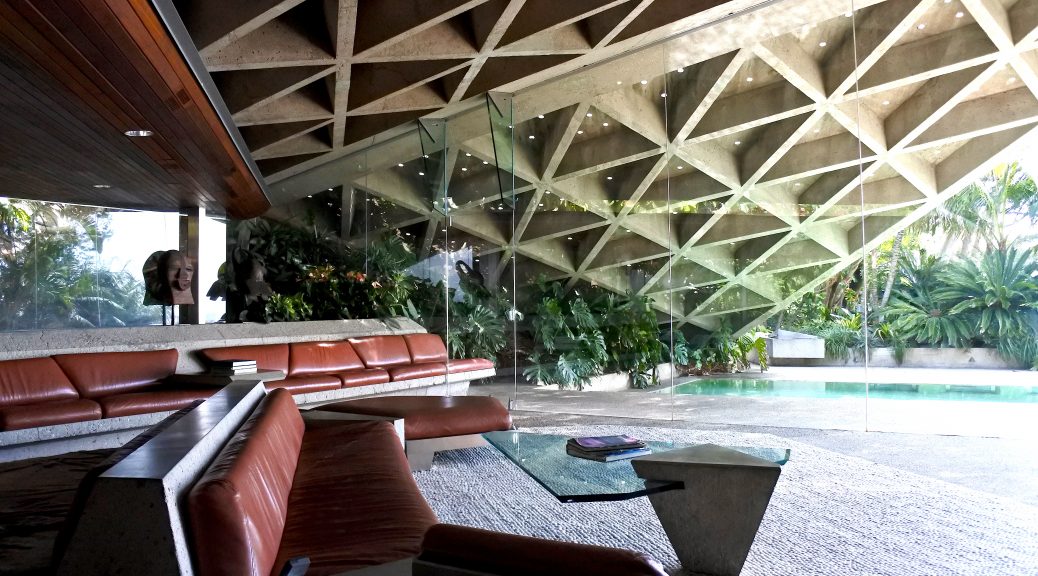 John Lauter built the Sheats-Goldstein Residence in 1963 in order to demonstrate how private space could be included into the natural environment. The student of Frank  Lloyd Wright followed the tradition of his master by sticking with organic architecture. In comparison to Wright, he payed more attention to a unique style.

This purpose was realised not only by designing  main fitments like the furniture or windows,  he even created exclusive rugs for the house to do justice to the above demands.  As a matter of fact, he also worked on a light configuration on the remarkable steep slope, which might be the most iconic part of the building. He collaborated with the world-famous light artist James Turrell to create a separate light installation as a part of the midst of the artificially constructed jungle. But his Lautner’s unfortunate death prevented him from finishing this unique team play so that James Turrell had to finish it on his own. Nonetheless, we can grasp how important it was to him, creating an all around perfected way of modern living. He acquired the passion for detail from Wright but applied that principle to literally every detail to be found in a living space. By relating the outside to the inside with regard to the interior elements, he achieved an overall harmonious composition.

So what I expected before going to the site was perhaps the most impressive building of our field trip programme. When I saw parts of the house in the Coen brothers’ independent movie ‘The Big Lebowski (1998)’, I was impressed by the simple stony structures on the surfaces in the background. Furthermore, even in the film the furniture drew attention to itself because of its way of fitting into the interior. Everything seemed to be one piece. Every photograph that was taken from the in- and exterior confirms that impression.

Therefore, my focus during the visit had ought to be on the interplay between inside and outside, but also how Lautner mastered the claims of privacy and intimacy. If I were to interpret Sheats-Goldstein’s perfectionistic tendencies in a more pathological way it wouldn’t be too far-fetched to accuse him of having been a narcissist, due to evidence such as him leaving his shoes next to his bed for the guided tours. Moreover, one could argue, his ‚greed for power and privilege‘ would be satisfied thanks to his ability to see everything from his house without being seen by anyone from this.

Olsberg, Nicholas, Between Earth and Heaven. The Architecture of John Lautner, New York, 2008