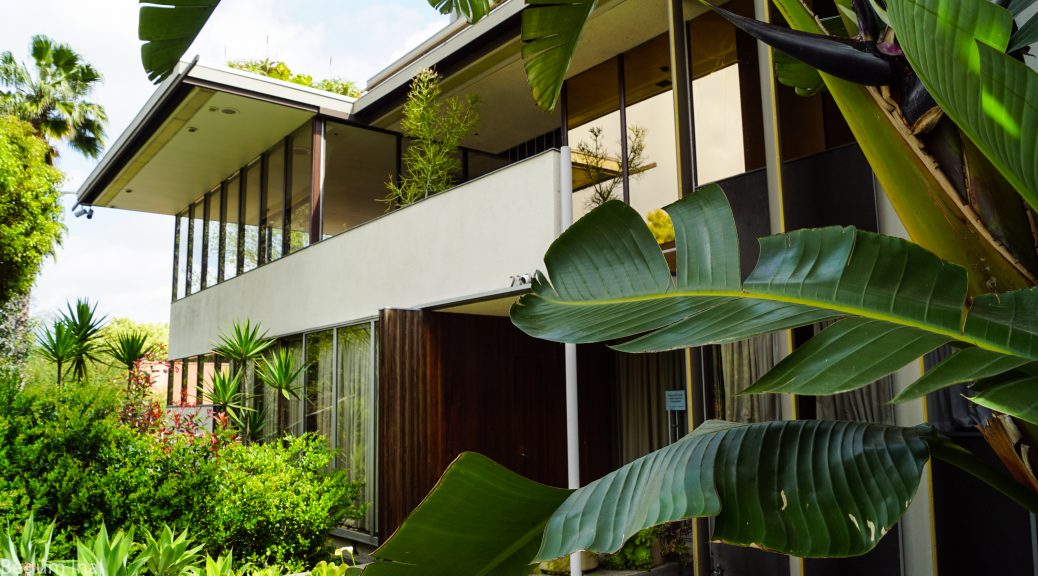 Thrilled finally to examine the VDL Research House by perceiving it through movement and intensify the theoretically acquired information by our own experience, we ran into a big disappointment. Due Spring Break, the house was closed. Currently the VDL House is supervised by students of the Cal Poly Pomona College of Environmental Design and unfortunately we weren’t informed in spite of reservation, that just at that weekend as spring break began, we would stand in front of closed doors.

The environment of the VDL House is a quite silent neighbourhood at the famed Silver Lake. Honestly, I wasn’t expecting such an impressive piece of architecture in such an inconspicuous street. Hidden between houses with tall fences and green bushes and trees, the VDL House guardedly appears with its narrow entrance.
Adorned by many bushes, dainty banana trees, huge palm trees and several aloe veras to count a few, the entrance resembles an oasis compiling examples of the typical Californian flora.

In contrast to Neutra’s Landfair Apartments, which are currently used as a student housing, I was glad to see that the VDL Research House was in a much better condition than other works of famous architecture. Other famous buildings  which aren’t privately owned were in similarily as badly conserved as the Landfair Apartments. The window frames in particular seem to fall apart because of their neglected wooden structure. In general, very distinct conditions of preservation could be observed, depending if the architectures were in private or public ownership.

The first part of the construction that caught my eye were the vertical shades in metallic optic, which react to the sunlight. The shades adapt to the falling sunlight and move autonomously. They reach out from the ground to the roof of the building.

The Facade of the VDL House can be structured into three areas: the high shades, the entrance area and the window facade.

The glass panels of the window facade are embraced by wooden frames in a brownish steel optic. A quite interesting part of the house is the balcony right above the entrance. It seems as if the balcony was open-ended on its left side. In combination with the shattered glasspanels it creates an illusionist effect where the differentiation of inside and outside becomes blurry.  If you take a look at the photographs it is not clear where the line between the inside and outside of the house intersects, so the limit becomes indistinct.

A beautiful detail is hidden in the crossing roof elements. The concluding wood ceiling joists don’t end up in clean edges, they form fine crossing structures that provides a lightness to the building. A more dramatic look the ceiling might get at night time due to the discreet light slates and light spots which are embedded inside of the ceilings joists.

The crossing element can also be found internally. During our visit at the Getty Research Center we were lucky to be supervised by some former students who worked at the VDL House. They told us some exciting aspects, like the continuation of the crossing elements in the inside of the house. They also told us that Neutra had tried to rebuild the original VDL House after the fire, as an homage to the original structure, but unfortunately there were new rights which didn’t allow him to construct it 1:1. That’s why he was urged to make some differences in the declaration, called the guest house as a garage e.g.. An added element are the steel pillars which ground the house. It’s the only structure of the house where he could used steel. This element has a similarity to his piano in the inside the house which he had transported originally from Austria and which also stands on steel feet.

At our meeting with the architecture class of the Pomona College we gained further information about the perception of the inside of the building. The inside of the building is sensually perceived as quite cool and continues with the play of the visual unclearness between the tension of outside and inside. Neutra also included natural phenomenons into the structure of the house. For example there’s a small pond on the roof of the building, which awakes the impression of an infinity pool.

I’m still disappointed about the fact, that we couldn’t experience the building ourselves, and also the fact that I have nearly no further leading information about the guest house. But I’m grateful to have met such interesting persons with the same passion for architecture in special for the VDL House and Richard Neutra Architecture. Particularly to have had the chance to exchange our thoughts and information about the VDL House, including their subjective impressions about the house which are really precious to me.

To sum up the comparison between the impressions we had before we saw and gained additional information about house and after, the main difference lies in the atmosphere of the house. I hadn’t had any feeling for the dimension and effect of the house until I stood in front of it. It’s discreetly enclosed by the breath taking Californian flora with which it is in perfect harmony. If you take a step further and stay right on the small gateway of the entrance it plays with the opposites of lightness and mightiness. The house possesses a strong occurrence which is underlined by its interest-stimulating fine details. It automatically leads to questions like ‚how do the shades work?‘, ‚are the frames made of steel or wood?‘, ‚how can this dominant building look so light and open?‘ and takes your time while you try to clarify those points. Unfortunately, pictures aren’t enough to relive these precious experiences.