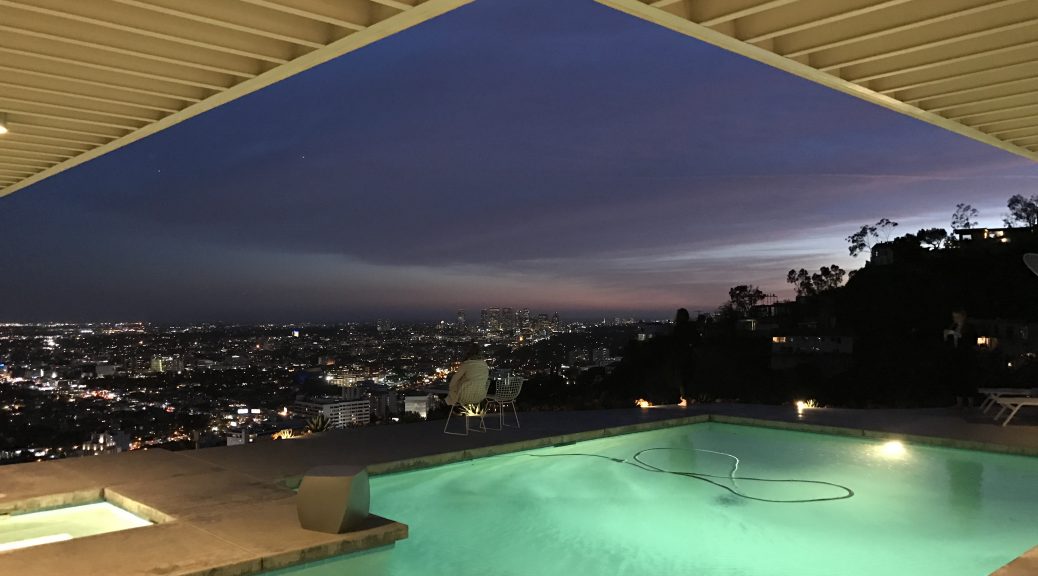 I was lucky to have been the driver for that distance to Stahl House when we went to West Hollywood. The route to the site was full of tight serpentines and steep hairpin bends, making the ride to a real adventure. I needed this change after constantly having driven straight, monotonous roads within the huge signature grid pattern of LA. Melissa, our guide, was already waiting for us on the spot.

However, I was curious what the front of the house would look like because it wasn’t possible to catch a glimpse on the web — for instance via Google Street View. I didn’t expect such a modest and plain entrance. The front was made of nothing except corrugated steel. If I hadn’t known that it’s the famous Stahl House I never would have paid any attention to it. In addition, the house is located on the outside edge of a sharp curve, one would not assume that there is a huge luxury home behind this presumed “construction site“. In comparison, Koenig used a slightly different method to guarantee privacy than Lautner did for the Sheats-Goldstein Residence. Koenig used the position of the house on the peak of a slope to prevent frontal prying eyes while Lautner took advantage of an artificial jungle which closes the property hermetically. Furthermore, Koenig allowed the rear exterior of the building to be obviously visible to the public area on the street, while ingeniously disguising the whole house as an ordinary building. The spectacular front side is hence only visible from Sunset Boulevard at the bottom of the hillside.

Let’s have a more theoretical look at this point: Perhaps even more interesting than the house itself is the effect-mechanism behind the photographic reproductions which were made of this architecture. Why could Shulman’s shots function so well as a representation of LA as a modern metropolis? What we know is that modern architecture pays attention to the use of  reduced geometric basic forms which merge into unornamented and asymmetric cubes, that unsupported constructions dominate the structural shell, which is why supporting and floating becomes an issue of modern transparent architecture. Pierre Koenig also knew this and he was aware of the increased application of glass. What classical-modern architecture initiated is raised to a whole new level by Stahl House in its usage of full-glass-walls. The developed outline is therefore structured thanks to the dematerialised relation between inside/outside and the disclosed construction. These features create an exhibition-like character of the house, which in turn evokes a clear atmosphere. Parts of the scenery are further brought to life by Shulman’s intelligent staging method. The view on the urban landscape through the vast glass panel is rendered highly iconic. It could basically be considered to be a new edition of the Classical superior gaze or the Romantic window view. And it is exactly this atmosphere two-dimensional images are capable of communicating. Stahl House is an Eldorado of vanishing lines, clean and open spaces, unhindered perspectives; Shulman’s skills and his visionary view on the one hand and the offensive pursued way of medialization on the other hand help reinforce the character of a pure and clean modernism — or perhaps evidence of an obsessive compulsive disorder.