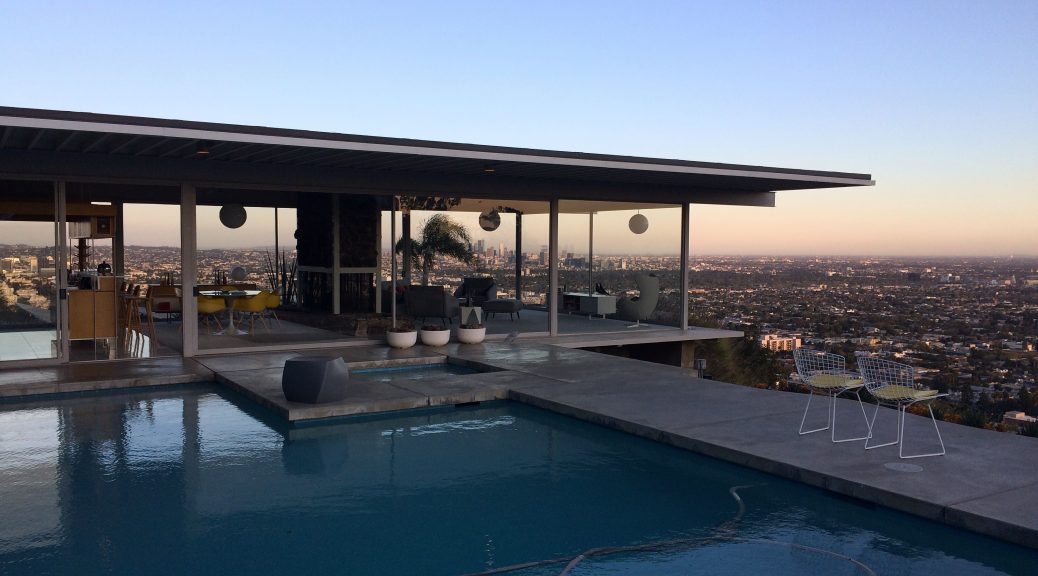 The Stahl House by Pierre Koenig is located in Los Angeles‘ Hollywood Hills neighborhood. The house is still owned by the children of Koenigs original client – Buck Stahl.

During our visit to the Stahl House on March 27th we were lucky to have been guided through this impressive example of Southern Californian modernism by a member of the Stahl family.

We arrived at the house shortly before sunset, having booked the ‚Sunset Tour‘ of the house. After signing a photo release we were lead onto the premises by Mrs. Stahl who cautioned us not to fall into the pool, having had seen this on several occasions.

The house is set on a steep hillside and does not have a large surrounding property. The outer most wall of the house even hangs precariously over the edge. The Stahl family have made only minor changes to the house since its original construction: they added a whirlpool on the terrace, renewed the bridges across the pool, added a catwalk to the outer wall for window cleaners and added reinforced concrete walls under the house to protect it from earthquakes, a renovation that is not visible when viewing the building. (View of the house from entryway, whirlpool and catwalk are visible in the background.)

The bedrooms, living room and kitchen are all accessible from the outdoor terrace through glas sliding doors. The rooms are also connected to each other through interior doors. (View of the interior of the house from the terrace)

The bedrooms were originally the way they are today (two bedrooms with double beds), however the Stahl family had children of both genders and split the left bedroom down the middle to accomplish a more private living space.

The kitchen – one of the very famous elements of this house – is still in its original form. Koenig built the kitchen into the house as though it were separate entity. The ceiling of the kitchen is below that of the surrounding rooms and separated from the living room by a bar. The kitchen island in the middle is one of the original furnishings of the house. (View of the kitchen with L.A. in background)

From the kitchen visitors have a view of the dining and living areas of the house. (View from the kitchen toward living and dining areas)

All of the exterior walls in kitchen, dining and living room are made of glas, opening the building up to a view of Los Angeles lying at the foot of the hill it is built on. The day we visited the house was very windy, making the glas shake in its frame.

My expectations of the Stahl House were met in every way. Seeing Los Angeles from such a high vantage point was truly an incredible experience that no photograph can do justice.

The Stahl family still uses the house for family functions, but have not lived there for many years. Asking Mrs. Stahl about the future of the house, she expressed a wish for the house to remain open to public, something she was sure the original Mrs. Stahl – her mother-in-law  – would have wanted.

The Stahl House was built between 1959 and 1960 by the American architect Pierre Koenig for Buck Stahl and his family. The structure is also known as CSH #22, after its number as part of John Entenza’s ‚Case Study House Program’ and is one of Koenig’s most well-known designs. 1

The bungalow is situated in the hills above West Hollywood and is invisible from street-level viewing, thus making the house the epitome of privacy – despite its walls being made mainly of glass, a typical feature of most Case Study Houses.

The one-story metal, glass and concrete structure builds an L-shaped frame for the house’s outdoor swimming pool – a typical feature of California ‚living’. All bedrooms as well as the living rooms face the pool, the main focal point of the building. When excluding pool and outdoor deck, the building harbors only six rooms on it’s approximately 204,4 square meter space.

Arguably most well-known for its portrayal in the architecture photography of the late Julius Schulman 2, the house is a prototype for modern living. From it’s high placement on the hillside, it features a prominent bird’s-eye view of the city’s lights below. The resident of the Stahl House thereby seems removed from the remaining inhabitants of the city – watching from a distance rather than taking part.

The view and it’s implications of grandeur and spectacular views have made the Stahl House a popular site for Hollywood movie productions and music videos, a house similar in style to the Stahl House was also used in an episode of the popular cartoon TV show ‚The Simpsons’ (Season 21, Episode 1 – ‚Homer the Whopper’)3.

The architect, Pierre Koenig, was born and grew up in California. The Stahl House is his second project for the Case Study House Program, the first being CSH #21, in West Hollywood.

Today the house is still in possession of the Stahl family, who allow guided tours through the building. This is a possibility we will be taking advantage of on our trip to L.A.