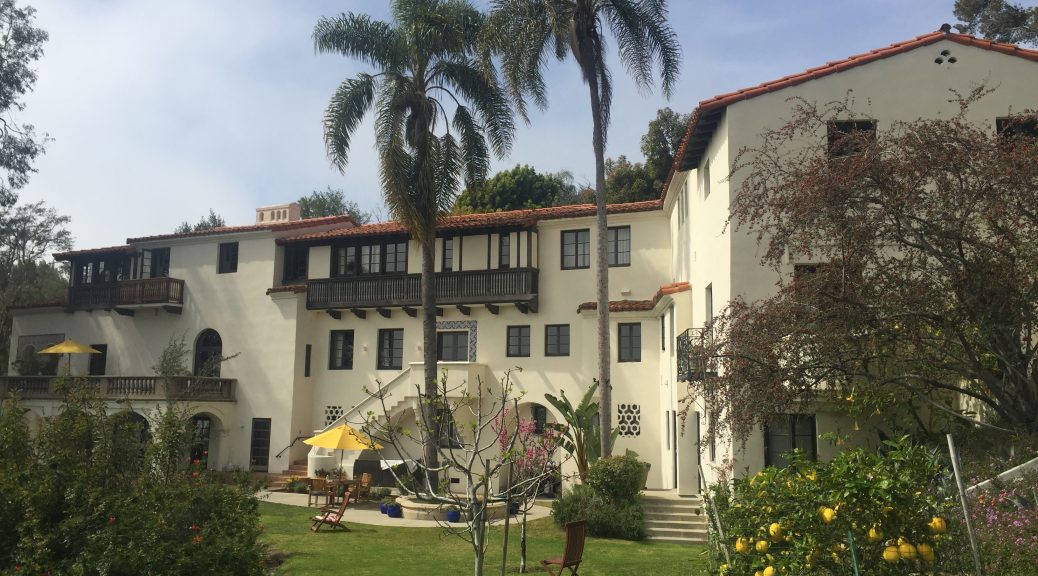 The Mediterranean-style structure of Villa Aurora stands in sharp contrast to the modernist architecture in Southern California. However, it is a representative example of an architectural style that plays an important role in the cityscape of Los Angeles – the Spanish Colonial Revival Style.

At about the same time as significant residences by modernists like Rudolph Schindler or Richard Neutra were built all over Los Angeles, the construction of Villa Aurora began in 1927 and was completed in 1928 by architect Mark Daniels. The villa was built in the hills of the Pacific Palisades and is inspired by a small Spanish castle that the contractor Arthur A. Weber had seen in Seville. Authenticity was expressed through imported wood for the ceilings from Spain and the patio fountain from Italy. Another central characteristic are the decorative majolica tiles that can be found throughout the entire house.

Located on a challenging hillside the house served as a demonstration home for the Los Angeles Times with the intention to promote the still rather uninhabited location of the Pacific Palisades as a good residential area. Furthermore the home was featured with the latest innovations including electric garage openers, a gas range, and an electric dishwasher. The project offered another up-to-date amenity: a house organ with exceptionally large pipes that are comparable to organs used in cinemas or theaters. It was conceived as an enriching factor of social life. But the lack of basic infrastructure in the area combined with the consequences of the economic depression in 1929 led to failure. A slow development of the neighborhood and the impact of isolation made Arthur A. Weber and his family move out after a few years. Far from the city of Los Angeles, nobody felt like living on the steep and isolated hill at a time when gas was rationed and so the house fell into disrepair.

When German-Jewish novelist Lion Feuchtwanger and his wife Marta who were persecuted by the Nazis settled in Los Angeles, they bought the villa despite its poor condition. They felt reminded of Italy through the landscape of the Palisades and immediately bought the house in 1943 for the price of $9000. The Spanish-style mansion in this quiet area with direct access to the sea soon became a meeting point of artists, intellectuals, and fellow émigrés like Thomas Mann or Bertolt Brecht. The isolated location had a dominating influence for Lion Feuchtwanger and his guests. Due to a control program of the U.S. government during the Second World War, individuals of German ancestry were designated as “enemy aliens” and subject to curfews and other restrictions on their conduct. Many of the writers and artists accepted the 8 p.m. ban on going out the house and used long evenings productively to work on their projects.

Although more densely populated, the seclusion of the place still plays a central role. Today Villa Aurora serves as a retreat for artists and writers in residence and maintains a place for cultural encounters.