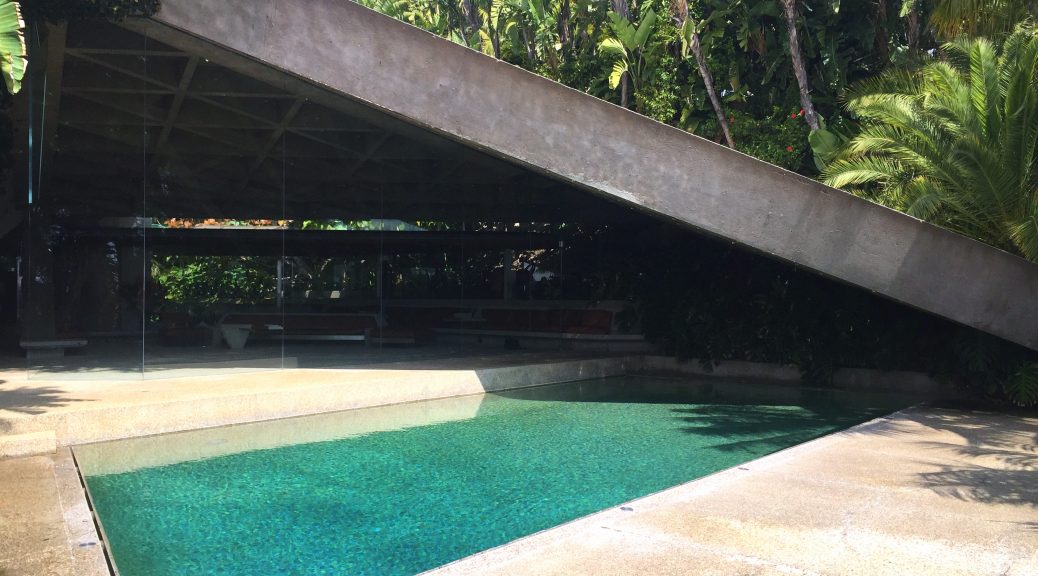 It is hard to imagine that the Sheats-Goldstein Residence ever belonged to anyone but fashion and basketball enthusiast James Goldstein who seems to be the human counterpart of his home. But in fact Goldstein is the mansion’s second owner. Originally the house was built for a family and their children. John Lautner designed the home that was commissioned by Helen and Paul Sheats in 1963. About a decade later James Goldstein purchased the property in 1972 from the previous owners and continuously commissioned Lautner with changes to the house.

The main entrance, which was supplemented with a waterfall, a koi pond, and a glass and stone walkway, provides a representative first impression of the spectacular home. Throughout the whole house the stucco work on the ceiling was replaced with redwood and the former steel window struts are now made of glass. Next to concrete, glass is the key element of the house. The master bathroom features an entirely transparent wash basin that lets you visually experience the water’s journey towards the sink. The theme of the river threads its way through the complete home. Goldstein had himself built numerous basins, fountains, and waterfalls that are organically included into the house. Built-in furniture that is completely related to the triangular shapes of the building creates a harmonious overall aesthetic.

The residence features many operable built-ins that contribute to the home’s very unique character. The kitchen is just one of many rooms with a retractable skylight. Floor to ceiling windows with spectacular views over Los Angeles that open and shut at the push of a button are extending the natural environment of the house. High in the hills of Beverly Crest and surrounded by a tropical jungle, meshing inside and outside becomes a major stylistic element in this architectural piece. The living room’s corrugated concrete ceiling is punctuated with glass emits that create the effect of sunlight passing through the trees in a jungle. Incorporating outdoor landscapes with indoor elements is a signature characteristic of Lautner who was once working under Frank Lloyd Wright.

Mr. Goldstein has acquired more land around the house and upgraded the surrounding property with an infinity tennis court, a night club, and an art installation designed by James Turrell. The entertaining facilities are built in the same style as the house, almost everything is made out of concrete and glass. Many things took years to implement and Goldstein is working on a nonstop basis to enhance his home. The Sheats-Goldstein Residence is characterized by steady dynamics as the house changes constantly. John Lautner and James Goldstein passed the ball to one another with their thoughts and ideas to perfect the home while Lautner was open to everything Goldstein had in mind. The constant improvements and changes to the house lasted until the architect passed away in 1994, this demonstrates a particularly close working relationship between architect and house owner. After 1994, Duncan Nicholson who used to be John Lautner’s associate took over as chief architect. Nicholson died in 2015 but Goldstein is still working on conversions today and has been revising and perfecting his home for 45 years now. Goldstein wants the house to be preserved and available to the public which he made sure in his will. In 2016 he promised the property to the Los Angeles County Museum of Art and thereby made the first gift of architecture to the museum’s collection.